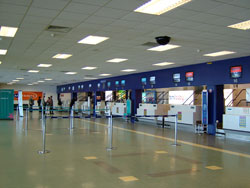 Leading low-cost airline Ryanair has called on the Irish government to scrap its €10 tourist tax to prevent a damaging effect on the Irish tourism industry.

The airline claims that in the first five months of 2009, over one million fewer passengers passed through Irish airports, accounting for over €600 million in lost revenue. Statistics from the Airport Council International (ACI) also confirm that every one million passengers at an airport create and sustain 1,000 jobs.

Ryanair's Stephen McNamara said: "This €10 tourist tax is nothing short of tourism suicide. For this tiny tax revenue of just €125 million pa, the Irish government will lose over 2,500 jobs and more than €1.5 billion in tourism spend, the VAT receipts on which would exceed €300 million.

"The Irish government must follow the example of their Belgian, Dutch, Greek and Spanish counterparts by immediately scrapping their stupid and regressive tourist tax, in an effort to avoid any further devastation to Irish tourism and jobs.

"Tourism is one of Ireland's most important industries and employers. It responds quickly to price increases. The Irish government's €10 tourist tax is making Ireland an uncompetitive destination and they must act now to save Irish tourism."

Ryanair provides low-cost travel from a number of UK airports. To ensure you secure the greatest value for money when travelling, remember to book your airport parking and airport hotel with Holiday Extras.