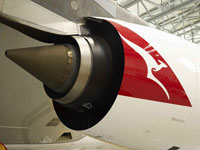 Qantas has today announced that due to the deterioration of trading conditions in recent weeks, it is revising its 2008/2009 full year profit before tax forecast to between AU$100-200 million from AU$500 million.

"Market conditions have deteriorated, especially in our international business. We are experiencing significantly lower demand, particularly in premium classes, and considerable price pressures with extensive sales and discounting by all carriers - in some cases leading to fare reductions of up to 50%.

"We have no choice but to lower our profit forecast and make major changes to ensure Qantas can weather the current commercial environment. This means moving immediately to reduce capacity in those areas of our business facing the greatest impact of market deterioration, but we will not be withdrawing from routes to achieve this.

"We have faced accelerated declines in passenger demand and revenue while market competition has intensified. Some competitors are reducing capacity, but overall market capacity into Australia has continued to grow despite falling demand."

In response to market conditions, Mr Joyce identified the following measures to be implemented:

Qantas is widely regarded as the world's leading long-distance airline and one of the strongest brands in Australia. It currently operates a number of departures from leading UK airports.

If you are heading away on holiday soon, remember to book your great value airport car parking and airport hotels with Holiday Extras, with savings of up to 60% off the gate prices available.