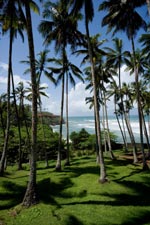 More Brits are taking holidays in Sri Lanka this year as the country continues to recover from the effects of the tsunami.

The Sri Lankan Tourism Promotional Bureau (SLTPB) hopes to welcome around 100,000 visitors from the UK this year, compared to just 88,000 in 2006. UK visitors to Sri Lanka in October were up 29.4% on the previous October, but January to October visitors are still down marginally - by 3.2% - on last year.

One reason for the increased optimism is the number of England fans travelling to Sri Lanka for the current Test cricket series. Up to 7000 England supporters are expected for the three-test series which started in Kandy on 1 December. England currently trail the series 1-0 thanks to the exploits of record-breaking Sri Lanka bowler Muttiah Muralitharan.

UK travel companies have given £1 million to the SLTPB for joint promotional activities in order to help rebuild tourism in Sri Lanka. "This ongoing support from the trade is extremely important for this small island, particularly given the recent isolated military conflicts and their perceived threat to tourists," says a spokesman.

With its sub-tropical climate, fabulous beaches, mountains, jungles and rivers Sri Lanka is a popular year-round holiday destination. As well as the Test cricket, upcoming events include the beach carnival from 17 to 23 December at one of Sri Lanka's most attractive resorts, Hikkaduwa. On New Years Eve there will be dances, music and fireworks all around the island.