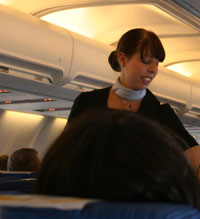 Monarch claims to be the first UK airline to introduce recycling of cans, bottles and paper on its flights.

"Monarch has been operating a paper collection scheme onboard its flights for a number of years now but feedback from passengers and crew highlighted the fact that the recycling of other items, such as plastics and cans, is a part of everyday life now which people wished to continue," explains Monarch managing director, Tim Jeans.

An online poll carried out by the airline in October revealed that only 16% of passengers felt airlines are doing enough to recycle onboard waste. Monarch believes that 70% of the waste generated in the cabin is potentially recyclable, including wine and water bottles, newspapers and magazines.

Onboard recycling is being introduced on all Monarch flights into Gatwick. Cabin crew will place items into separate recycling bags before passing them over to cleaning staff at the airport.

Monarch plans to extend the scheme to include all its flights over the coming months as part of its Monarch and the Planet [MAP] initiative to improve its environmental footprint.

Help &
Support
Monarch On Board Recycling