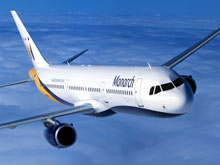 Low fares airline Monarch Airlines is celebrating 40 years in business this weekend with a special flight from Luton airport to the popular Mediterranean island of Menorca.

Monarch claims to be the longest established airline brand still trading and flying under the same name in the UK. The airline was formed in 1968 when Monarch Airlines was launched following a collaboration between Airline Engineering Ltd (now Monarch Aircraft Engineering Ltd) and Cosmos. The airline's first commercial flight was on 5 April 1968 when flight OM118 departed from Luton airport bound for Madrid.

The airline's 40th anniversary will be marked by a celebration flight this Saturday 5 April. Passengers on the flight from Luton airport to the summer sun destination of Menorca will check in at retro styled check in desks. Once onboard they will be treated to champagne and cakes served by Monarch trolley dollies in replicas of the original 1968 uniform complete with yellow mini-dress.

As part of its 40th anniversary celebrations, Monarch is also offering up to £40 off all return flights booked between 4 April and midnight on Tuesday 8 April.

Passenger numbers on Monarch flights were up 9.5% in March compared to the same period last year. However, the percentage of seats filled was only marginally higher at 82.86%, up 0.16%. During the month Monarch launched two new flights from Gatwick airport, to Larnaca in Cyprus, and the Balearic island of Menorca.