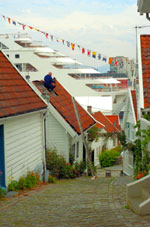 Four million Europeans took a cruise holiday last year, an increase of 17% on the previous year, according to the latest figures from the European Cruise Council.

The increase in Europeans opting for a cruising holiday is way ahead of expectations - the ECC had predicted that the four million mark would not be reached until 2010. And only five years ago the number of Europeans going on a cruise holiday was just 2.6 million.

Cruising is most popular with UK residents, followed by Germans, Italians, Spanish and French. The UK contributed 1.3 million passengers last year, a growth of 11%. Of these 870,000 opted for fly-cruises, while 467,000 departed from UK cruise ports, the majority from Southampton and Dover.

The fastest growing cruise market in Europe is Spain, which contributed 518,000 passengers, a dramatic growth of 32%. Next largest growth was recorded in Italy, where passenger numbers increased by 24% to 640,000. Italians favoured Mediterranean cruises and cruises to the Canary Islands, with only 7% choosing a cruise in Northern Europe. Only 280,000 French people took a cruise in 2007, an increase of 16%.

The German cruise market grew by a relatively modest 8% to 763,000 passengers in 2007, but the market seems set for more significant growth. Royal Caribbean Cruises and TUI AG have announced a joint venture to develop cruises for the German market. And the market leader in Germany, Aida Cruises, has ordered four new cruise ships.