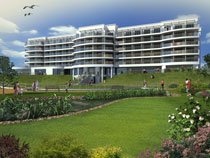 British institution Butlins is shaking off its traditional holiday camp image with plans for a contemporary spa hotel at its holiday resort in the seaside town of Bognor Regis.

Butlins says the new 200 room hotel will provide guests with a choice of contemporary accommodation plus the opportunity to pamper themselves in a state of the art hotel spa.

With what Butlins describes as “an ultra-modern exterior”, the new hotel will use the same construction team as the award-winning Shoreline Hotel, which is also on the Bognor Regis site.

The new hotel, which has still to be named, will be designed by Havant based company PWP Architects. The accommodation on offer will include family rooms, doubles, twins and extended suites.

Project director for the new hotel, Mike Crowther, says: “This is obviously an exciting project for us. The Shoreline Hotel has proved a huge success attracting over 35,000 guests last year and achieving an average occupancy of 92%. The new hotel not only enables us to demolish older accommodation, but it provides us with more opportunity to support the fantastic regeneration program for Bognor Regis as a whole. The new hotel will look breathtaking”.

Work on the new spa hotel will start this spring and is expected to be completed in time for a grand opening in summer 2009. Once opened the hotel is expected to provide up to 200 new jobs.

The seaside resort of Bognor Regis in West Sussex has one of the best sunshine records in the UK and is conveniently located for nearby attractions including Chichester, the historic port of Portsmouth, and the lively resort of Brighton.