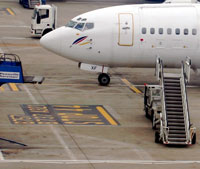 British Airways has admitted that premium short haul routes are not performing well as it releases its passenger figures for November.

But BA believes that the relaxation of the rule allowing only one piece of hand luggage on planes from January will help the short haul market. "The single hand baggage rule also continues to have an effect but the alleviation of this rule in January will benefit the short haul premium market in particular," it says.

In contrast to short haul routes, BA reports "Long haul premium markets continue to be strong". Overall passenger capacity for BA in November was up 1.6% on November 2006. Traffic, measured in revenue passenger kilometres, was up by 2.4% overall, with a 5% increase in premium traffic and a 1.9% rise in non-premium traffic.