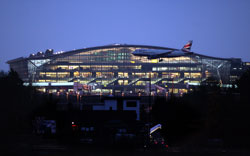 British Airway’s move to Terminal 5 this month, plus rising fuel costs and the gloomy outlook for the airline industry, have contributed to a profits warning and fall in the airline’s share price.

As a result of these increased costs British Airways is forecasting an operating profit of around 7% for 2008/9. "The outlook for next year is consistent with economic slowdown, the impact of increased fuel costs and one-off Terminal 5 transition costs, all of which analysts have already factored in to their expectations," says BA chief financial officer, Keith Williams. The City was not impressed, however, as BA shares fell by more than 7%.

BA’s latest passenger figures for February show that load factors – the percentage of seats filled – increased by just 0.6% to 68.4%. There was a 15.1% increase in premium traffic and a 3.4% rise in non-premium traffic.

This is going to be an important month for BA as Heathrow Terminal 5 opens on 27 March and there is the threat of strikes by BA pilots which could cause travel chaos over the Easter holiday period.