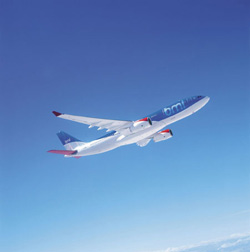 Airlines are starting to line up to buy bmi British Midland which holds 11% of the valuable take off and landing slots at Heathrow.

Indian airline Jet Airways, the largest domestic airline in India, is believed to have approached Sir Michael Bishop, chairman of bmi, about selling his stake in the airline, according to the Sunday Telegraph.

bmi has the largest number of slots at Heathrow airport after British Airways. Following the new open skies agreement between the EU and the US last year, airlines will be able to try to acquire slots at Heathrow from April, shortly after the opening of the new Terminal 5.

Currently only four airlines - BA, Virgin Atlantic, American Airlines and United Airlines - have rights to fly on the highly prized route between Heathrow and the USA.

BA and Virgin Atlantic have already shown an interest in buying bmi, while German airline Lufthansa - which already has a 30% stake minus one share in the airline - has an option to buy Bishop's 50% stake plus one share. The remaining 20% share is currently held by Scandinavian airline SAS, which is believed to be interested in selling its share.

The battle for bmi is sure to be hotly contested, and other airlines are likely to throw their hats in the ring. Earlier this month aviation industry analysts at ABN Amro said: "We expect a major change in UK aviation in 2008, not as a result of open skies, Terminal 5, recession or oil - but rather resolution of bmi's future".