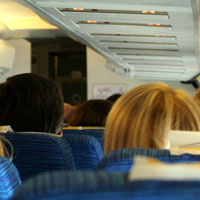 Two airlines, Singapore Airlines and Air France, have announced they are to charge passengers extra to sit in economy seats with more legroom, and other airlines are expected to follow suit.

Passengers can book the Preferred Seats anytime before check in. Singapore Airlines acknowledges that previously the so-called Preferred Seats were only available on request and without confirmation. It says that other categories of Preferred Seats that similarly offer more legroom may be made available in the future.

But the Preferred Seats will not be available to everyone. To be able to book the seats, passengers must be at least 21, fully able-bodied and able to open the exit doors and pass through them, be able to understand safety instructions in English, be in good health, not be pregnant or carrying infants, not be under the influence, and not require an extension seat belt “because of large body size”.

For an example of the extra cost, Singapore Airlines says a passenger travelling from Sydney to London Heathrow via Singapore would have to pay a total of $100 to select Preferred Seats on both legs of the journey.

Air France is also charging passengers to sit in seats with extra legroom, in their case for a supplement of 50 euros. The seats can only be booked via the internet, from 30 hours before the flight departure time.

The airline says it has introduced charges on seats with extra legroom due to passenger demand. Passengers are apparently attracted by the opportunity to have a guaranteed seat with extra room to stretch out for their journey.

Seats with more legroom can already be booked on flights from Paris Charles de Gaulle airport to the USA and Canada including flights to New York, Los Angeles, Miami and Boston. The service will be extended to other long haul routes during the winter.