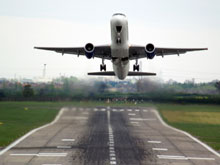 Italy’s national carrier Alitalia has lost more than €3bn since 2000 and stated recently that it had less than €300 million left in cash. The demise of Alitalia is a stark warning to other airlines in what is expected to be a difficult period ahead for the aviation industry.

One of the reasons that Alitalia has struggled is competition from budget airlines. Low cost carriers easyJet and Ryanair have both been successful in Italy, as well as on other routes flown by Alitalia.

Air France KLM is one of the world’s biggest airlines and was itself formed from the merger of the French and Dutch national airlines in 2004. Other airlines including German national carrier Lufthansa and Russian airline Aeroflot had expressed an interest in Alitalia, but an auction for the Italian airline last year failed when all the bidders pulled out. Alitalia began exclusive talks with Air France KLM at the end of 2007.

The €139m Air France KLM is paying for Alitalia is only around a fifth of the airline’s market value. But with the airline thought to be weeks away from bankruptcy, the Italian government – which owns a 49.9% stake in Alitalia – was clearly keen to sell.

Air France KLM is expected to cut around 1,600 of the 19,000 or so jobs at Alitalia, which has been widely regarded as overstaffed and inefficient. The airline giant will also cut loss-making flights and concentrate on the most profitable routes. It hopes to make Alitalia profitable sometime in 2009.

Before the takeover can go ahead it will need to be approved by the Italian trade unions and the government. The 19,000 workers at Altialia are represented by no less than 19 unions. And a general election is being held in Italy next month following the fall of Romano Prodi’s government in January, so it could be some time before the deal is finally ratified.