First A380 flight to New York 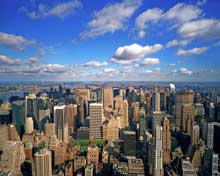 The Airbus A380 superjumbo will make its first commercial flight to the USA on 1st August when Emirates launches new flights from Dubai to New York.

Emirates is taking delivery of its first A380 on 28th July and the new plane will be deployed on one of Emirates’ twice daily flights between Dubai and New York.

“The Americas represent a key focus area in Emirates’ route development plans, and we are delighted to be the first airline to launch commercial A380 services to the continent,” says Emirates Airline chairman and chief executive, Sheikh Ahmed bin Saeed Al-Maktoum.

“We are confident that Emirates’ customers travelling to and from North America will welcome the A380’s additional space and capacity, as well as our luxurious onboard amenities which will provide a very high quality travel experience previously associated only with private jets,” he adds.

Emirates’ new A380 will have 489 seats: 14 in first class, 76 in business class and 399 in economy. The new interiors on the plane will be unveiled on 28th July when Emirates receives its first A380.

The airline will receive a further four A380 superjumbos by next March. The new planes will operate on flights between Dubai and Heathrow, and Dubai and Sydney-Auckland. Emirates is the largest customer for the A380, with a total of 58 planes on order worth $18.8 billion at current list prices.