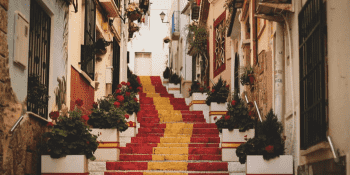 Spain is a hugely popular destination for UK travellers and it's easy to see why. From the cultural hotspots on the mainland, to the volcanic Canary Islands and the stunning beaches of the Balearics - Spain has everything you need for every kind of holiday.

What time zone is Spain in?

What curreny do they use in Spain?

What language do they speak in Spain?

What power adapters do you need for Spain?

What is the average fight time to Spain?

Spain is located on the Iberian Peninsula, in the southwest corner of Europe. The capital of Spain is Madrid. Check out our handy map below to get a better feel for the country. 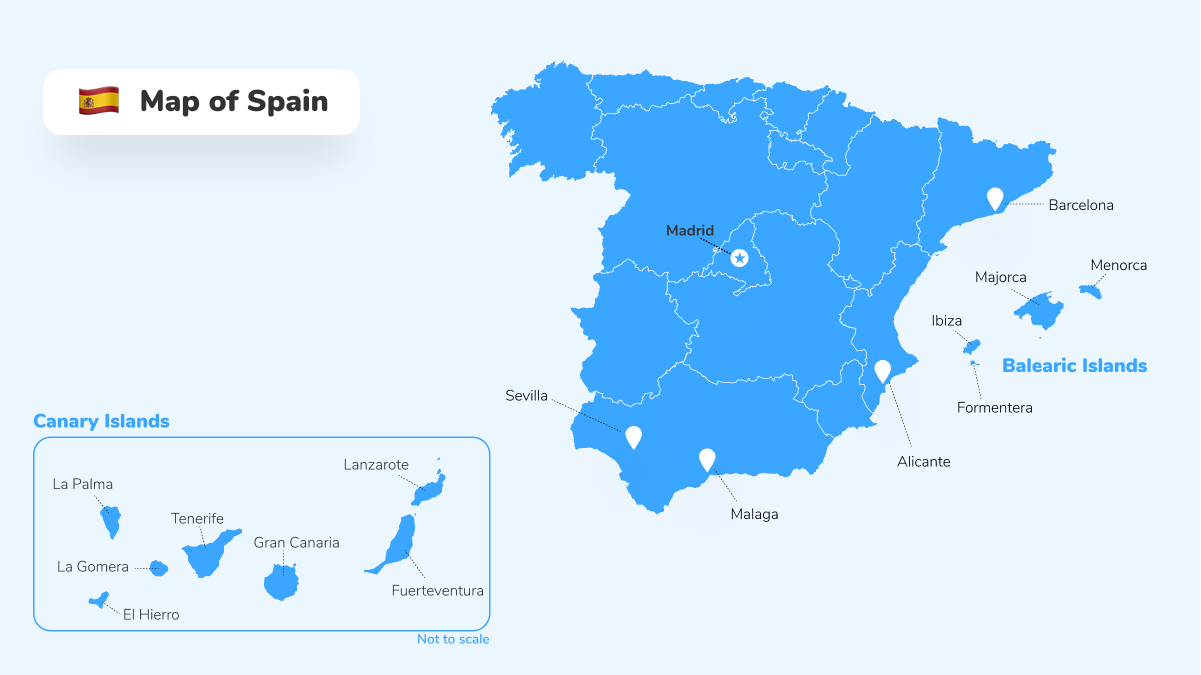 Tipping is discretionary. Restaurants always include service charges in your bill, but these will be clearly stated. A small tip of 5-10% on top of that is usually expected, but not a necessity.

Pre-book your Spain Airport transfers from under £5 with FREE cancellations up to 3 days before departure.

Compare and book cheap car rental in Spain, with prices starting from under £3.00 per day with FREE cancellations*

Famous for its stunning architecture, fantastic food and wine and beautiful landscapes, mainland Spain is full of delights. Take a look at some of our favourite destinations. 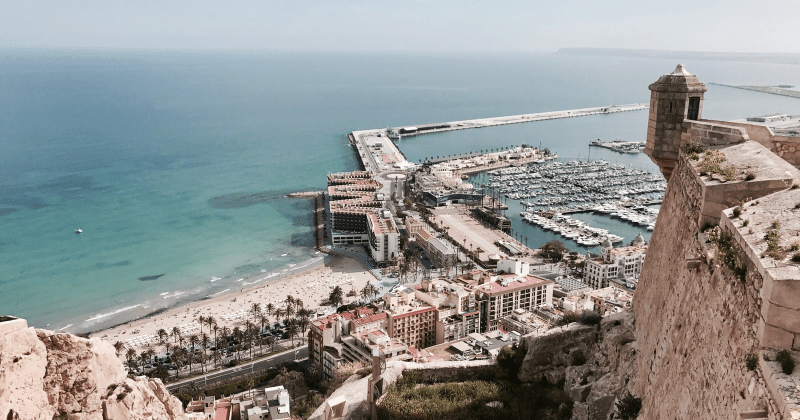 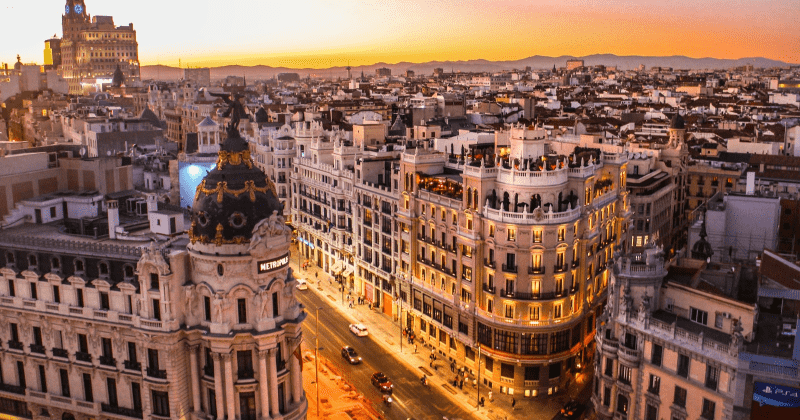 With glorious weather, dramatic landscapes, beautiful beaches and plenty to do, it's easy to see why this cluster of volcanic islands off the coast of northwest Africa make for a perfect escape. 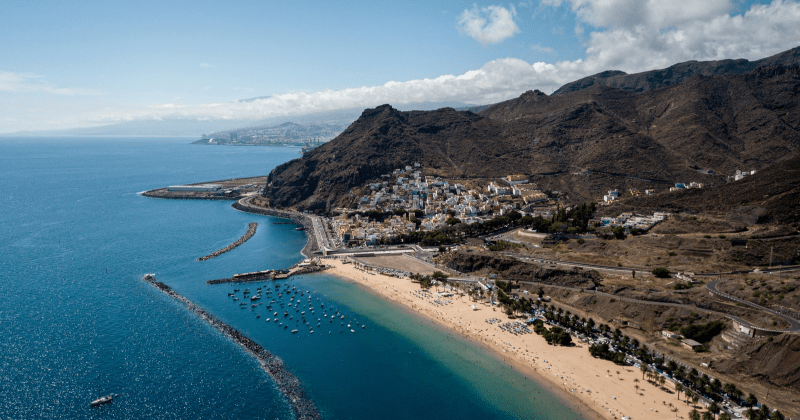 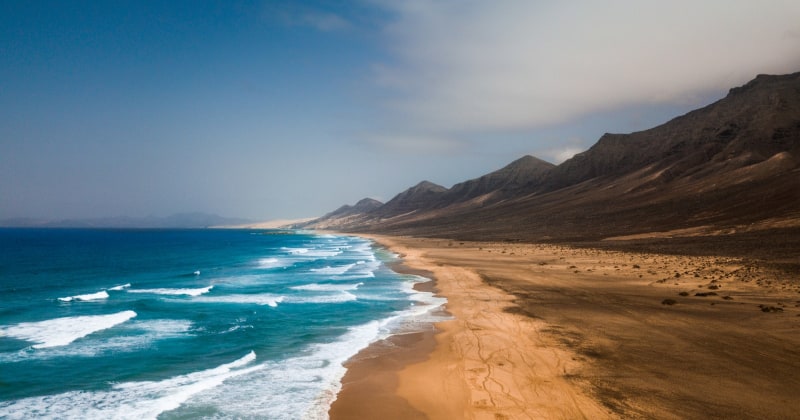 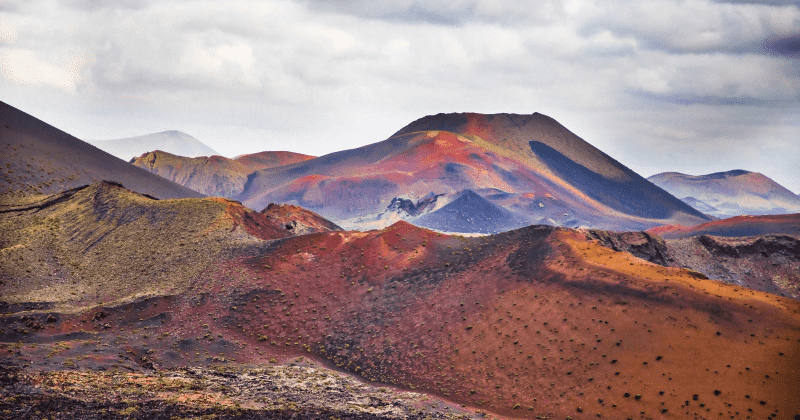 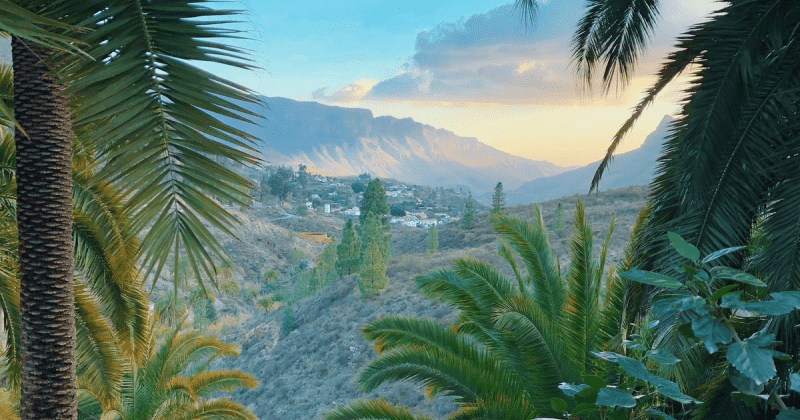 With its sheltered coves, sandy beaches and perfectly turquoise waters the Balearic Islands have something for all travellers. Expect beautiful architecture, waterparks and some famous nightlife destinations! 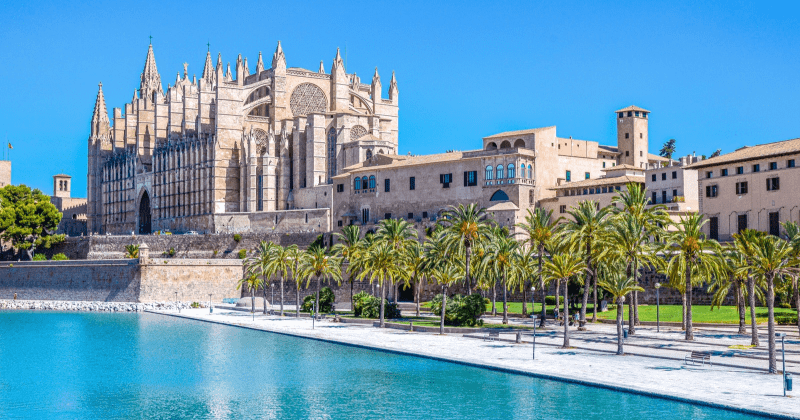 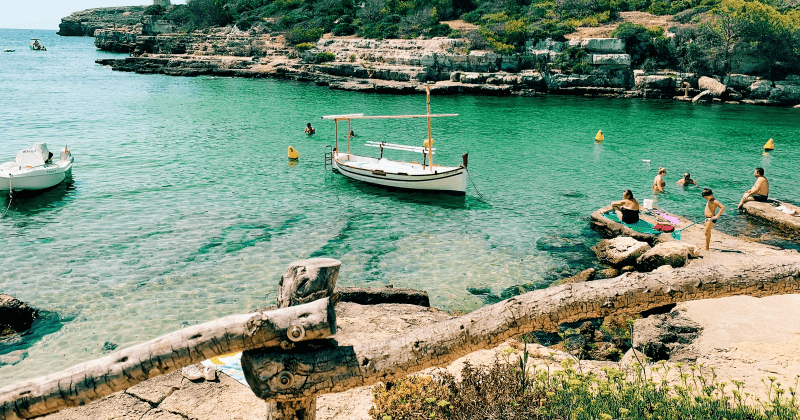 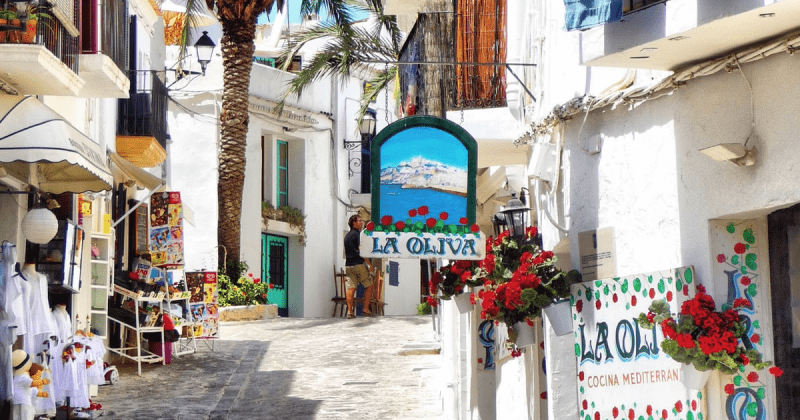 Spain has a total of 17 regions, also known as autonomous communities, and 2 autonomous cities, each with its own history and culture, some with their own official language or local dialect.

We understand that weather matters when it comes to deciding when the best time to visit is and what you can get up to while you're away. Generally speaking Spain enjoys a mediterranean climate with warm, sunny summers and mild winters. To learn more about the weather in Spain in more detail, take a look at our month by month breakdown below.

Spain weather in winter (December to February). As you'd expect these are the coldest months in Spain, with temperatures ranging between 6-16ºC, however, it's nowhere as cold as most other European countries. In the north you can expect some frequent rainfall, across the rest of the country there's considerably less. Winter in the Canary Islands is a very different story, however! The Canary Islands enjoy a mild climate all year round with temperatures around 22ºC and long sunny days. It's no surprise that they're a popular place for a winter getaway!

Spain weather in spring (March to May). Spring is a lovely time to visit Spain in both city and beach locations; temperatures are warming up with highs of 24ºC and there's plenty of sunshine.

Spain weather in summer (June to August). Summer brings hot, dry weather with temperatures usually over 30ºC in the day and rarely dropping below 18ºC at night. It's warmest inland and on the south coasts and slightly cooler the further north you go.

Spain weather in autumn (September to November). In autumn temperatures are starting to cool, particularly in the evenings and early morning. That being said, sunny days and mild temperatures, around the 18-23ºC mark, are often enjoyed, especially in the southern, eastern and central regions. Be sure to pack a waterproof jacket though as sudden showers aren't uncommon.

Spain has so many beautiful and vibrant cities, each with their own unique charm, offering everything from mountains to beaches to bustling cityscapes. Take a look at just 5 of our favourite cities in Spain below.

1. Barcelona. The Catalan capital is jam packed with must-see sights and attractions. From Antoni Gaudí's stunning architecture, including La Sagrada Família, top museums including the Picasso Museum, charming neighbourhoods, like the Barri Gòtic (Gothic Quarter), not to mention the array of gorgeous beaches and parks such as Bogatell beach and the famous Park Güell, the city is a delight to explore.

3.Seville. Seville is the sun-drenched capital of Spain's Andalucia region and is famed for its flamenco dancing, tampas and rich Moorish heritage. Be sure to give yourself time to get lost in the charming neighbourhoods and impressive plazas, as well as exploring the popular sights like the Royal Alcázar of Seville and Seville Cathedral.

4.Granada. Located in the Andalusia region, in the foothills of the Sierra Nevada mountains, Granada is a picturesque city with a rich history and culture. Spend your days exploring the landmarks like the Alhambra fortress, discovering amazing street art and wandering the pretty streets lined with quintessentially Spanish white-washed buildings, cafes, and tapas bars.

5. Palma de Mallorca. Palma, the capital of the island of Mallorca, situated in the Balearic Sea, is the perfect place if you're looking to enjoy endless golden beaches. As well as sun, sea and sand, Palma is brimming with lots of other fun things to see and do, like enjoying panoramic views from Bellver Castle, admiring the impressive Palma Cathedral or browsing the boutique stores and fresh food markets.

1. Spain has whopping 590 Blue Flag Beaches and is the country with the most Blue Flag sites every year since the awards began in 1987.

4. Spain has the highest number of bars out of all the countries in the EU. Cheers to that!

5. La Tomatina is a festival held annually on the last Wednesday of August in the town of Buñol, where tons of ripe tomatoes are thrown at each other during one of the world's biggest food fights!

6. Spain produces around 44% of the world's olive oil - that's more than Italy.

7. Spain is home to the second most spoken language in the world: Spanish (just behind Mandarin).

8. Spain is home to the world's most visited construction sites. Barcelona's Sagrada Familia has been under construction since 1882 and is expected to be completed in 2026. The world-famous cathedral attracts millions of visitors each year.

9. There are no laws on nudity in Spain. That being said, it's considered inappropriate in plenty of places.

10. Spanish people have the second longest life expectancy in the world: an average of 79 for men and 85 for women.

What is the best month to visit Spain?
The best time to visit Spain is in spring (March to May) or autumn (September to November). During these times you'll be able to enjoy warm weather, fewer crowds and cheaper prices. Spring is an especially brilliant time to visit as it's often warm enough for beach days, with beach bars and water sports starting to open up. Plus, Spring sees the start of lots of must-see arts and culture festivals all across Spain.

How many days in Spain is enough?
How many days you choose to spend in Spain will largely depend on where you're going and what you want to do when you're there. For example 3-5 days would be enough time to see the highlights of one of the most popular city destinations like Barcelona or Madrid. However, with a week or more, you'll be able to explore more of the city and perhaps multiple regions. If you're planning a relaxing beach holiday, a popular amount of time is 8+ days.

What is the nicest part of Spain to visit?
There are so many incredible places to visit in Spain. From golden sandy beaches to buzzing cities and charming mountain villages, Spain has so many diverse and interesting regions. Some of the most popular places include:

What is the cheapest month to go to Spain?
The cheapest (and quietest) time to visit Spain is usually during the winter months, from December to March. There's still plenty of things to enjoy during this off-peak season, from skiing in the mountains to catching some winter sun on one of the islands. Low price deals on flights and hotels can also be found in early spring and late autumn. 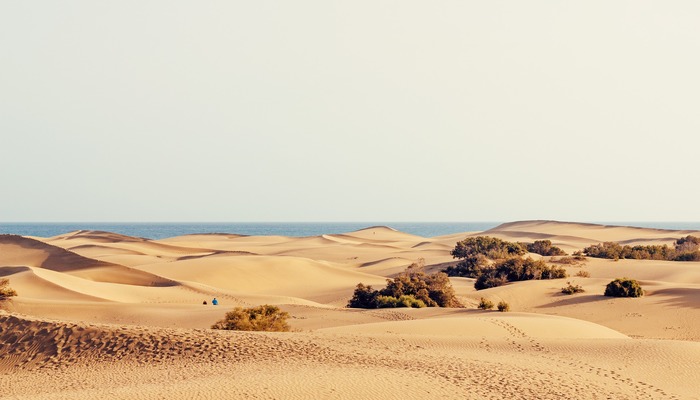 Like most British holidaymakers, our customers love Spain! With warmer climates than the UK, it's perfect to visit all year round - so here's the lowdown on our top 5 Spanish beaches.